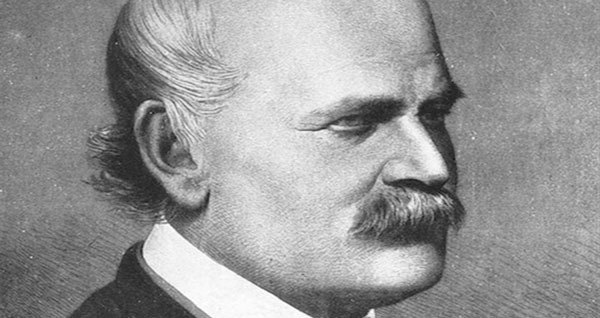 “All truth passes through three stages. First, it is ridiculed. Second, it is violently opposed. Third, it is accepted as being self-evident.” Arthur Schopenhauer

Semmelweis discovered why so many women, worldwide, were dying in childbirth: As difficult as it is to believe today, cleanliness was not considered important in 1846. In the first month that he worked in Ward No.1 of Vienna General Hospital 36 out of 208 women died in childbirth, nearly 20%.

In 1846, many years before the role of bacteria in diseases was discovered, Ignaz Phillip Semmelweis was appointed to what was then by far the largest maternity hospital in the world. At the Vienna General Hospital it was very common for obstetricians to carry out autopsies in the morning and then make there way to Ward No 1 without washing their hands.

Semmelweis insisted on hand washing with chlorinated lime solutions before any contact with patients.  He also advised that the ward itself had to be cleaned with calcium chloride. He dared to suggest, and go on to prove beyond any doubt, that cleanliness mattered! The result …. death in childbirth ‘almost’ disappeared.

In 1847 this ‘suggestion’ was extreme, and was largely ignored, rejected or ridiculed. Surgeons took great offence to the ‘implication’ that they were unhygienic.  He was dismissed from the hospital and harassed by the medical community in Vienna, which eventually forced him to move to Budapest.  The hospital returned to their ‘old’ ways and the ‘death in childbirth’ rate returned to 20%.  Semmelweis continued to be ridiculed.

Semmelweis was outraged by the indifference of the medical profession and began writing open and increasingly angry letters to prominent European obstetricians, at times denouncing them as irresponsible murderers. The continued criticism finally broke him down.  His contemporaries, including his wife, believed he was losing his mind and he was in 1865 committed to an asylum.  Semmelweis died there only 14 days later, possibly after being severely beaten by guards.

Semmelweis’ practice only earned widespread applause and acceptance years after his death, when Louis Pasteur developed the germ theory of disease which offered a theoretical explanation for Semmelweis’ findings. Semmelweis is now considered a pioneer of antiseptic procedures.

“When I look back upon the past, I can only dispel the sadness which falls upon me by gazing into that happy future when the infection will be banished . The conviction that such a time must inevitably sooner or later arrive will cheer my dying hour.”  Ignaz Semmelweis